Be sure to flood the hotline, emessage and tweet on Tuesday, Feb. 8, 2022 to keep the pressure on President Biden to DO THE RIGHT THING!

White House Press Secretary Jennifer Psaki was unable to answer Huffington Post reporter Jennifer Bendery’s question on the White House response to demands that Leonard Peltier be immediately released. Obviously, President Biden is not communicating with her about what action he will take. This is an urgent situation, so we must take action now!

In addition to calling the hotline, emailing and tweeting Biden, be sure to contact Jennifer Psaki by email and social media on Monday, February 7, 2022 to demand Leonard’s immediate release: Email: comments@whitehouse.gov; Twitter = @PressSec

Peltier was convicted of aiding and abetting the killing of two FBI agents during a shootout on South Dakota’s Pine Ridge Reservation in 1975 while a member of the American Indian Movement. He was captured in Canada on Feb. 6, 1976 and illegally extradited to the U.S. based on false affidavits. Leonard has always maintained his innocence and is the longest-held Native American political prisoner in the United States. His lawyer, former federal judge Kevin Sharp, says Peltier’s case was riddled with misconduct, including witness coercion and withholding of exculpatory evidence. Peltier’s health, age and unfair trial make him the perfect candidate for executive clemency. “The legal remedies are no longer available,” says Sharp on Peltier’s case. “Now it’s time for the [Bureau of Prisons] and the president of the United States to fix this and send him home.”

“The big misconception about this is that Leonard Peltier was convicted of shooting two agents. He was not. They had to drop that, because the evidence they had presented that he had shot two agents was false. It was perjury. It was manufactured. So they had to drop that case and come up with a new theory, and that theory was aiding and abetting. And when Leonard talked about not being able to put on his defense, one of the things that Judge Benson said  — when he excluded the evidence related to the misconduct in the reign of terror, was that the FBI is not on trial here. But once he did that, you have to put all of this in context. That’s why Judge Heaney, who was on the 8th Circuit, who heard Leonard’s appeal — and although he upheld the conviction, later came out himself in favor of commuting this sentence — said the federal government has to take responsibility for what happened here. And absolutely, they do. Context matters. But the lack of evidence that this man killed someone also matters. And so it’s time. We’re now 46 years later. We’ve got a 77-year-old man with multiple health issues, and his tribe, the Turtle Mountain Band of Chippewa, saying, ‘We will embrace him. Please send him home to us.’ And that’s what I’m asking the president to do: Send him home.” 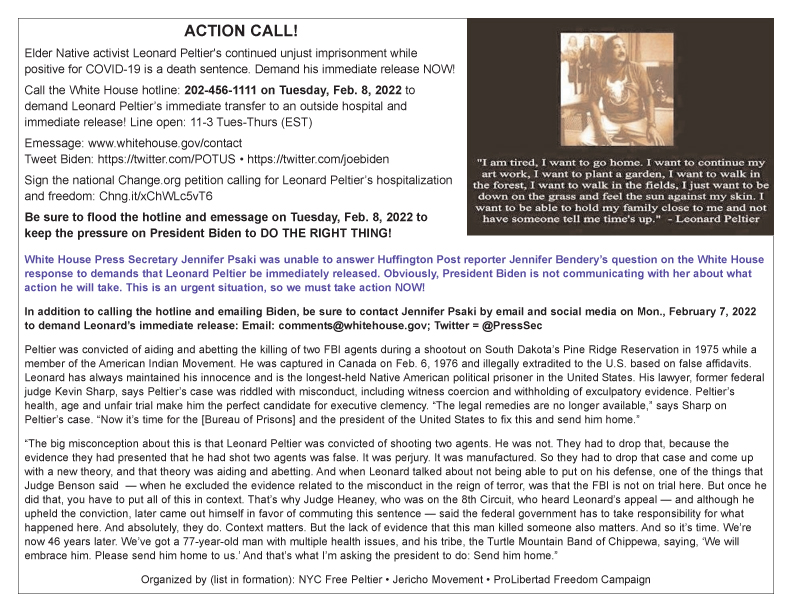