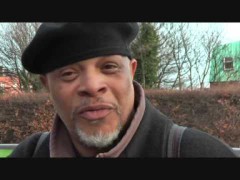 ASHANTI OMOWALI ALSTON: Revolutionary, speaker, writer, organizer, motivator. Ashanti is one of the few former members of the Black Panther Party who identifies as an anarchist in the tradition of New Afrikan ancestor Kwesi Balagoon (BPP & BLA) within the Black Liberation Movement. As a result of his membership in both the BPP and Black Liberation Army (BLA), he served a total of 14 years as a political prisoner and prisoner-of-war. He is currently on the Steering Committee of the National Jericho Movement to free U.S. political prisoners. On top of all that, he is an Elder-co-parenting two youngins’ (5 & 2!) and a grandfather of a small “maroon nation.” Ashanti resides in Providence, Rhode Island.