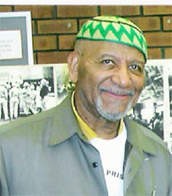 Herman Ferguson was never a braggadocios man. But on Thursday Sept 25, 2014 – when the 93-year-old lifelong international activist made his transition, there was not one – but two rainbows in the sky over Brooklyn.

“This is the sign we needed, it means he is ascending – and the ancestors are pleased,” commented activist Divine Allah. “I know he is sitting with Malcolm X, Sonny Abubadika Carson, Harriet Tubman, Queen Nzingha and Sojourner Truth.”

“My father lived a long productive life,” Michael Ferguson told the Amsterdam News. “All of the things he did were driven by his love for his family and the community. His legacy is incredible.”

Dequi Kioni-sadiki, host of WBAI's 'Where We Live' told the AmNews of Ferguson's passing shortly before 4p.m. on Thursday, “Herman made his transition at about 2.50p.m. He was surrounded by family and he was at peace.”

Mama Iyaluua Ferguson broke the news to the rest of the world via Facebook later, saying, “It is with great sorrow and sadness that I tell the Black Nation that my beloved husband and comrade of 47 years departed this earthly plane and joined the ancestors this afternoon Thursday, September 25. Herman is loved and will always be loved. Herman is missed and will always be missed. When arrangements for the farewell service are complete I will post them here.”

Michael Ferguson said that there will be a memorial service held by the Steven Lyons Funeral Home in Raleigh, North Carolina, sometime next week.

Ferguson led a storied life. He already has his book - An Unlikely Warrior (co-authored by Iyaluua), and there should be a movie.

He started out as a Merchant Marine seaman; became an influential member Malcolm X's Organization of Afro-American Unity (OAAU), rattled sabers as teacher and assistant principal in the New York City public school system (eg; Ocean hill-Brownsville),became a target of COINTELPRO and was convicted by an all-white male jury along with his co-defendant, Arthur Harris, of plotting to kill kill civil rights leaders in hope of revolutionizing the Black agenda; initially escaping a seven year prison sentence, he ended up exiled in Guyana, for 19 years; thriving in their Ministry of Education, he then went on to establish the Guyanese National Service, retiring as a Lt Colonel in the Guyana Defense Force. Ferguson voluntarily returned to America in 1989, and was immediately arrested at New York's JFK airport, spending several years incarcerated in various upstate prisons. Upon his release, Ferguson dove deep back into the Black liberation movement, and spearheaded the fight to highlight the existence of stateside political prisoners. From Mumia Abu Jamal, Sekou Odinga, Mutulu Shakur, and dozens of others Ferguson fought for their release.

He was a fighter to the end.

Karima Nilaja Blaize, shared that Thursday, “was bitter sweet for me as it was not only the day that I celebrated the birth of my youngest children, Justin and Jarrett, but also a day that I mourn a great loss-my Grandfather. As the patriarch of my family, Colonel was the strongest man I have ever known. One who has taught me so much about who I am, where I come from, and the importance of fighting for what I believe in. One who was so strong that he was able to save me by literally plucking me from the water after I had fallen out of a boat as a child, and then endure the many years of the craziness that was Karima that followed. And, of course, a man so strong that he could do this while loving my Grandmother, Iyaluua, to the moon and back and serve as the patriarch of the Black Nation.”

Blaize concluded, “While he will be missed, I know that he is home now; where he will continue to watch over us all….and maybe even assist my over worked Guardian Angels.”

“Baba” Ferguson – as he was affectionately called, will be memorialized at Steven L. Lyons Funeral Home (1515 New Bern Avenue, Raleigh, North Carolina) at 1:30PM, Saturday, October 4, 2014. Moments of visitation with the family, 1-1:30, prior to the service.   Survivors; beloved wife; Iyaluua Ferguson of the home; sons, Michael Ferguson (Laverne) and Mark Ferguson both of NY; daughters; Jackie and Constance Ferguson both of Los Angeles, CA; stepdaughters, Nilaja Verna Turner-Magbie (Paul) of Holly Springs and Deidre Hicks of Cary; 10 grandchildren, 14 great grandchildren, 2 great-great grandchildren and a host of other relatives and friends.