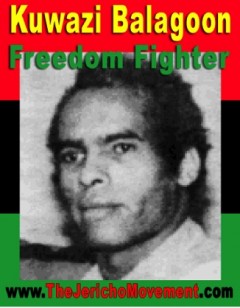 In the name of Allah Most Gracious Most Merciful…

Kuwasi Balagoon is dead. "Surely we are Allah’ and to Him we surely return." The Quran tells us each soul shall have a taste of death and all too often we make the mistake of seeing death as a process outside of life. Kuwasi was full of life, therefore his death seems odd.

Because it has been reported that Kuwasi died of AIDS people have a tendency to speculate on how he came by it. In Amerikkka we are told the high-risk groups are homosexuals and intravenous drug users. And for the Black Nationalist, these are no no’s. So to make his death acceptable some may theorize the pigs infected him. I personally cannot say how he was infected but I do know from research that the majority of people with AIDS are in Africa and the majority of the people infected here are Black and Latino.

We should be reflecting on how to avoid this plague (if its possible) and more so on ourselves as a movement. We must ask, Did we do everything we could for Kwasi when he was underground, was the movement environment conducive for the psychological and moral survival of the individual? There is a lot of rhetoric about support but very little practice. Sisters are forced to do a lot of things unacceptable to the movement when they are underground but history has shown very few some forward to aid. The guerrilla is like a fish in the sea but the New Afrikan guerrilla must survive in a cesspool of corruption and insensitivity.

We must never forget that Kuwasi’s history was one of struggle, consistent struggle, and a frontline soldier who was always there. We must never forget that Kuwasi having freed himself from prison was captured trying to free another comrade and latter freed himself again. He stayed in the mist until he was captured again. His stance at trial was (that) he was a freedom fighter and everyday for the rest of his life he thought of freeing himself and fighting oppression. He wasn’t a bloodthirsty sociopath but a warm caring human being who knew that armed resistance to racist terrorism was/is a legitimate means of struggle. Kuwasi was a good soldier and comrade. He will be greatly missed.

Kuwasi taught us much in his life. Loyalty – commitment and bravery – his death should also be a lesson. We must purify ourselves, clean up our communities and find those things, which are good and teach them to people. We must also learn to care for each other otherwise we’re doomed. In Kwasi’s death we must find new meaning, seek the right path.

POW/PPThe above was written shortly after the death of Kuwasi Balagoon 15 years ago by Black Liberation Army soldier Albert Nuh Washington who died himself a year ago, ALSO in prison! 1986 and 2000. Kuwasi was the first of the BLA prisoners to die in prison. We know that Nuh was not the last as just THIS year Teddy Jah Heath died in prison. It is said that death varies in its significance. It can be weightier than a mountain or lighter than a feather. We said that then as young fighters and we feel its weight now as many of us are middle aged, in poor health and walking everyday in the midst of social and spiritual devastation of our communities. When one has lived the high tide of revolutionary struggle and has tasted the power of striking back, when one has been part of organizational forces and ancestral support that can take credit for putting fear in the lives of formerly awesome pig oppressors, it is hard to attend the wake or funeral of another comrade who reminds you that YES WE DID IT. We did it and that we made a comittment to help build the Armed Potential for the liberation of our communities. Crazy though we may have been, and crazy as some of us still be, we left a mark and a message for generation to come that we CAN win. And if it be that we cant win then we can, like Eldridge say "throw a nigger wrench into the machinery" with the only power that we have…the power to destroy the orderly flow of official everyday bullshit.

Kuwasi Balagoon, 1946 TO 1986. The essence of the Lumpen-street outlaw. Law-breaker, law-manipulator, law-eliminator. And revolution sounds like grandma’s breakfast call. It was not only the social and historical forces that shaped him and so many others like him. It wasn’t only the creation of the Black Panther Party and the genius of Huey P. Newton’s vision of an American Revolution led by that day’s discarded peoples "with no ties to the basic means of production." It was that the idea was INSANE that anyone should believe that the discarded people of the streets can be ACTORS, leading actors on the stage of human struggle for freedom. Power to Insanity! This is the most advanced technological society in the world. White racism had corralled black people into urban Bantustans. Out of seemingly nowhere comes Franz Fanon’s hustlers, janitors, maids, stick-up kids, alcoholics, welfare recipients, killers (some trained by Uncle Sam to kill other people of color), illiterates and college students turned revolutionaries who will rock and inspire others to join all kinds of social movements to ROCK this kapitalist empire at its very foundations. Kuwasi was a part of that. He was an OUTLAW; an outlaw who was in search of a way to be the most effective political actor he could for his people and for the destruction of Babylon. His very constitution was freedom. His very personal constitutional make-up was outlaw, as in, "I cannot accept any law that is out of harmony with my very being." That search for existential relevance was found in the Black Panther Party. Marx, Lenin and others could agree on one thing about the Lumpen, that you can’t harness them, you can’t discipline them. And maybe they were right. You can’t, or at least it’s hard to harness the Lumpen spirit, which is a nomadic spirit, an anarchic spirit which is finally, a fuck the bullshit spirit cuz Free Life is worth taking your best shots, literally. It was a good thing (that just needed other creative organizational forms) not a bad thing. That’s why when those of us even thought about joining the Black Underground we thought of panther outlaws before us like Kuwasi, Saundra Holmes, Geronimo and Twyman. Kuwasi’s name was already well known. Wild man, escape artist. Freed himself and risked it sneaking armed back to the prison gates for others. Daring, a daringness that was not anything foolish but represented the kind of spirit that you can’t harness, the kind that guided Huey’s intellectual daringness, the literary daringness of Papa Rage, the role-breaking daringness of Assata Shakur, and the bi-sexual daringness of… who? -- of Kuwasi himself!

I remember when I was in prison we got word through the VooDoo Communiciations network through Kuwasi (and others whom I can’t name), that if we needed help in raising up on outta that high walled prison to let them know. We did. That was Kuwasi, for whom RISKS were like the air he breathed. You breathe, you take risks. I risk, therefore I AM. And though it made no sense to me then that he was also The Anarchist, I thoroughly understood it now. When the BPP could no longer serve his spirit, the Black Liberation Army’s anarchistic style could. And he obviously liked the vision of a Republic of New Afrika, free from Babylonian control and self-determining. I respect that.

Upon my prison release at the end of 1985 and attending his Memorial after his death on December 13, 1986, comrades of the Black Liberation Army (and those in the know) shared with me those stories (which make for precious new motivating Myths) of the TRICKSTER, shape-shifter, elusive, daring, bold… Kuwasi. He could take’em down: enemies, armored cars, while being sustained by love and loyalty, both giving and accepting. Kuwasi lived his life, his short 40 years own his own terms, outlaw terms from his personal to his political. He was in solidarity with whomever he wanted, he loved whomever he wanted, he fought on whatever terrain he landed, whether on the streets or in the prisons.

Lastly, in my ramblings, he left us all a rich legacy in actions and words. Both had these things in common: they challenged the dominant reality that held humanity in check, and they challenged us\our dominant revolutionary thinking if IT was holding our humanity and movement activities IN CHECK. That was the meaning of his political outlawry, his free lifestyle and his undying love for Lumpen Humanity. He is bigger now than he was in life. We can all, proudly – the Black/New Afrikan, the Youth, the Queer, the Outlaw, the Community, the Other – take a piece of him and be further motivated to struggle. Each piece will only multiply. Ha! He’d probably just ask that we learn to CONVERGE collectively and deal a final DEATH BLOW to this infernal enemy of LIFE.

Work for the Freedom of All Political Prisoners with Urgency!

All power thru the people!