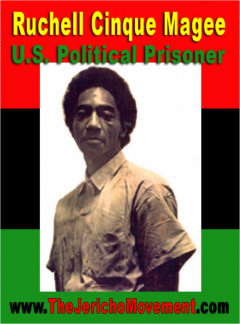 Ruchell Magee was born an only child on March 17, 1939 in the small town of Franklinton, Louisiana. Across the Deep South, Jim Crow laws, white supremacist lynchings, KKK terror, segregation, and legal bias against Black people were common. In 1955, at the young age of 16, Ruchell was accused of aggravated attempted rape due to his relationship with a white girl in KKK territory. For context, Emmett Till was lynched, mutilated, and murdered in August 1955 for allegedly whistling at a white woman. Magee was given a completely bogus trial with an all-white jury who sentenced him to eight hard years in the notorious Angola State Prison, a former plantation. In 1962, the state deprived him of his inherited property and ordered that he leave Louisiana and go to Los Angeles.

Ruchell was finally allowed to leave Louisiana’s dungeons in 1963, so he headed to Los Angeles for a fresh start. Only six months later, Ruchell and his cousin Leroy were arrested as they sat with a man named Ben Brown in Brown’s car. Brown told police a far-fetched tale that Ruchell and his cousin had kidnapped him in a dispute over a $10 bag of weed, even though the cousins didn’t even have the car keys.

As the police arrested him, they beat him so badly that he had to be hospitalized for three days, but the injustices were only beginning. The racist Superior Court of Los Angeles County railroaded him with the trumped-up charge of kidnapping to commit robbery. There was extreme malpractice from both the prosecutor and the defense attorney, which came to a head with Magee’s lawyer pleading him guilty without his consent. Ruchell was unjustly imprisoned with a seven-years-to-life charge for this alleged crime.

Ruchell strived to develop his mind in prison, where he learned the rich traditions of African history and liberation struggles. He took on the name “Cinque” because he felt a connection with the African freedom fighter Cinqué, who led a rebellion on the slave ship La Amistad. Magee won himself a second trial by pointing out that his indictment was improperly joined with his cousin’s case (among other improper acts). In 1965, Magee unfortunately faced the same judge that bound and gagged him in the first trial for making lawful objections. In Ruchell’s own words, the second trial “used fraud to hide fraud”, upholding the conviction and shooting his trial down.

Magee had gained a reputation in the prison system as a people’s lawyer by doing work like filing a lawsuit for the wrongful death of prisoner Fred Billingsley, who was beaten and tear-gassed to death in his cell in the San Quentin prison in February 1970. Ruchell’s work helped lead to a large settlement for the Billingsley family.

After seven years of torture in California’s prison system, he took an opportunity for freedom when it came to him. On August 7, 1970, Ruchell Magee and William Christmas were among the witnesses for the trial of James McClain, who was on trial for assaulting a guard after the brutal Billingsley murder. Jonathan Jackson, the younger brother of prisoner and Black Panther Party Field Marshal George Jackson, attempted to free his brother and the rest of the Soledad Brothers by taking control of the courtroom in Marin County Courthouse. Jonathan announced that he was taking over and offered weapons to Magee, Christmas, and McClain. Even though he wasn’t aware of the plan at its start, he knew that this could be his last chance to escape slavery and get the world’s attention on his unjust conviction. The prison guards opened fire on the group as they left the building, killing Jackson, Christmas, McClain, and a judge and critically wounding Ruchell and a prosecutor.

Ruchell continues to fight for his liberation while simultaneously fighting to expose the corrupt judicial system. He would have never been in the Marin County Courthouse courtroom if he received a fair trial in his 1963 case. Even throughout decades of abuses and injustices, Ruchell has continuously offered his support as a people’s lawyer for other prisoners.

Ruchell urgently needs public support in 2021, especially because of his factual innocence, his age of 81 years old, and the risk of COVID-19 in California’s wretched prisons. He currently has two motions in the legal system - a request to Governor Gavin Newsom for commutation in California and a hearing in the Supreme Court. Ruchell is scheduled for a parole suitability hearing in July 2021, where he has the possibility of getting parole.