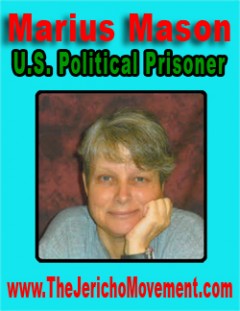 "Marius was an extended care assistant at a small Cincinnati school when arrested on March 10, 2008 by federal agents. Marius was convicted of involvement with a December, 1999 arson at a Michigan State University office in which GMO research was being conducted and a January 2000 arson of logging equipment in Mesick, Michigan. Both arsons were claimed by the Earth Liberation Front."