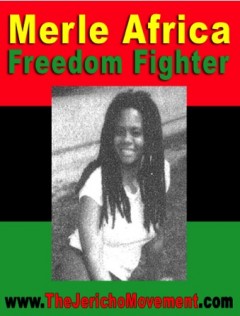 The MOVE 9 are innocent men and women who have been in prison since August 8, 1978, following a massive police attack on us at our home in the Powelton Village neighborhood of Philadelphia. This was seven years before the government dropped a bomb on MOVE, killing 11 people, including 5 babies.

The August 8, 1978 police attack on MOVE followed years of police brutality against MOVE and was a major military operation carried out by the Philadelphia police department under orders of then-mayor, Frank Rizzo. Mayor Rizzo’s reputation for racism and brutality was and is well known–it followed him up through the ranks of the police department to the police commissioner’s office to the mayor’s office.

During this attack, heavy equipment was used to tear down the fence surrounding our home, and cops filled our home with enough tear gas to kill us and our babies, while SWAT teams covered every possible exit. We were all in the basement of our home, where we had 10 thousand pounds of water pressure per minute directed at us from 4 fire department water cannons (for a total of 40 thousand pounds of water pressure per minute). As the basement filled with nearly six feet of water we had to hold our babies and animals above the rising water so they wouldn’t drown. Suddenly shots rang out (news reporters and others know the shots came from a house at 33rd and Baring Street, not our home, because they actually saw the man shooting) and bullets immediately filled the air as police throughout the area opened fire on us. Officer James Ramp, who was standing above us on street-level and facing our home, was killed by a single bullet that struck him on a downward angle. This alone makes it impossible for MOVE to have killed Ramp, since we were below street level, in the basement.

MOVE adults came out of the house carrying our children through clouds of tear gas, we were beat and arrested. Television cameras actually filmed the vicious beating of our brother Delbert Africa (3 of the 4 cops that beat Delbert went to trial on minor charges). Despite the photographic evidence, the trial judge (Stanley Kubacki) refused to let the jury render a verdict and himself acquitted the cops by directed order. Nine of us were charged with murder and related charges for the death of James Ramp.

Within a few hours of our arrest, our home (which is supposed to be the “scene of the crime” and therefore evidence) was deliberately destroyed, demolished, by city officials when they were legally obligated to preserve all evidence, but we were held for trial anyway. We went to trial before Judge Edward Malmed who convicted all nine of us of third degree murder (while admitting that he didn’t have “the faintest idea” who killed Ramp) and sentenced each of us to 30 – 100 years in prison.

Judge Malmed also stated that MOVE people said we are a family so he sentenced us as a family; we were supposed to be on trial for murder, not for being a family. It is clear that the MOVE 9 are in prison for being committed MOVE members, not for any accusation of crime. Three other adults that were in the house on August 8th did not get the same treatment as those that this government knows are committed MOVE members. One had all charges dismissed against her in September of 1978 with the judge saying that there was no evidence that she was a committed MOVE member when the issue was supposed to be murder. The second one was held for trial but released on bail; she was acquitted. The third one was held for trial with no bail, convicted of conspiracy and given 10-23 years; she was paroled in 1994. It is obvious that everything depended on whether or not the courts thought it was dealing with a committed MOVE member, court decisions had nothing to do with the accusation of murder.

It has been 25 years since the August 8, 1978 police attack on MOVE, 25 years of unjust of imprisonment, but despite the hardship of being separated from family-members, despite the grief over the murder of family-members (including babies), the MOVE 9 remain strong and loyal to our Belief, our Belief in Life, the Teaching of our Founder, JOHN AFRICA. We have an uncompromising commitment to our Belief, which is what makes us a strong unified family, despite all that this government has done to break us up and ultimately try to exterminate us.

It will take a massive amount of public pressure to force this rotten corrupt government to release the MOVE 9 and all political prisoners–What can YOU do to add to the pressure?