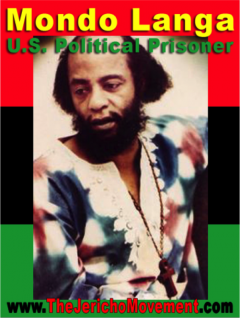 “I was known as 'David Rice.' I chose a [new] name 'Wopashitwe Modo Eyen we Langa,' which in the African languages of Kwanyama, Gikuyu, Ibibio, and Hausa means: 'Wild (natural) Man Child of the Sun.' I chose a name that would, among things, reflect my African heritage. This choosing of a name is part of the process of growth."

Wopashitwe Mondo Eyen we Langa (formerly known as David Rice) has been a political prisoner in the Nebraska State Penitentiary since 1971, when he and fellow Black Panther Ed Poindexter were convicted for the bombing murder of Omaha policeman Larry Minard, and given life sentences. Both have consistently denied any connection with the crime, and Amnesty International, after reviewing the many inconsistencies in the trial transcript, as well as FBI files obtained through the Freedom of Information Act, has called for either a new trial, or immediate release.

He was born in Omaha in 1947, graduated from Creighton Preparatory School and took courses at Creighton University. He wrote for the local underground paper, Buffalo Chip, from 1969 to 1970 and joined the Black Panther party. In the 45 years since his conviction, Mondo has created art, written short stories, poetry and journalism. He had five books of poetry published between 1973 and 1978, and another in 2006, and has contributed poems and stories to such literary journals and magazines as Prairie Schooner, The Black Scholar, ARGO, Black American Literary Forum, Shooting Star Quarterly Review, Pacifica Review, Obsidian, Black Books Bulletin and over 30 more. In addition, his poem, "Great Babaleur" was featured in 'Malcolm X: By Any Means Necessary' by Walter Dean Myers (Scholastic, Inc, 1993). Two of Mondo's plays, 'Different Dances' and 'We Dance in Our Neighborhood', were performed by Ujima Youtheatre in Nebraska, as well as in New York City.

Mondo is one of several co-authors (including Yosef-ben-Jochannan, John Henrik Clarke, et al) of 'The Race: Matters Concerning Pan Afrikan History, Culture, and Genocide' (Native Sun Publishers, 1992). He is a contributor to Nebraska Voices, the anthology commissioned by the Nebraska Humanities Council in celebration of the sesquicentennial of Nebraska statehood.

In prison, he continued his education, and was a mentor and exemplar to young inmates just coming into the system. In all the years of his incarceration, he did not committed a single act of violence; he was, in fact, been an exemplary prisoner.