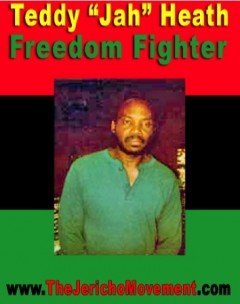 "Teddy Jah Heath was active in the black liberation and civil rights movement in the 60s. In 1968 he joined the Black Panther Party. On May 2, 1973 Jah was arrested again and charged with kidnapping a drug dealer.  This politically motivated trail occurred amidst government orchestrated hysteria around the Black Liberation Army, of which Jah was a member. He was given a life sentence by an all-white jury for an alleged kidnapping, in which no one was injured. Teddy Jah Heath served almost thirty years and recently died of cancer. "