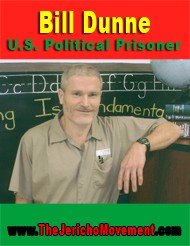 "I am a collectivist, long having recognized that in numbers there is strength and capability and security and satisfaction. There is more humanity in cooperation than in isolation… With mutual struggle, we can forge the diverse elements of our side of the barricade into a powerful weapon against the depredations of imperial capital. It can be the tool of emancipation from exploitation and oppression of that class enemy that afflict us all."

Bill Dunne is an anti-authoritarian sentenced to 90 years for the attempted liberation of an anarchist prisoner in 1979.

Bill Dunne was arrested in 1979 when he and Larry Giddings attempted to free fellow revolutionary Artie Ray Dufur.  The two successfully freed Artie, but were arrested after an exchange of fire with police as they were fleeing the scene. Bill and Larry were charged with auto theft and aiding and abetting the escape, for which Bill received an 80 year federal prison sentence.

In 1983 Bill attempted to escape prison and was given another 15 years in prison.

Bill spent seven and a half years in lockdown at the infamous maximum security Marion prison for his attempted prison break.  During his time in Marion he helped social prisoners pursue their education, both politically and academically. In one case he helped prisoner Ernesto Santiago receive his GED.